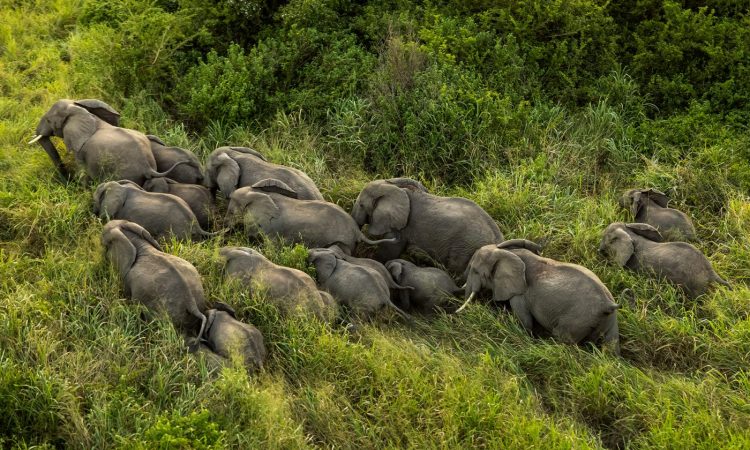 Viewing African Bush Elephants in Virunga National Park: The African bush elephant, commonly known as the Savanna elephant, is the biggest terrestrial mammal on the earth. It may weigh up to 7 metric tons and survive for up to seventy years in the wild. Despite the threat posed by the ivory trade, sightings in Virunga national park are increasing.

What to know about African Bush Elephants in Virunga National Park.

Elephants are referred to as “ecological engineers” due to their physical influence on habitats, which range from digging up riverbeds to creating trails and uprooting trees. According to research, locations with more elephant tree damage have higher species richness. Their feces are also significant, since it disperses seeds and provides food for dung beetles.

Savanna elephants love visiting watering holes not only to satiate their thirst induced by the harsh African heat, but also to spray themselves to cool off. They frequently follow a shower with a dusting to guard against parasites, heat, and the sun’s UV rays.

The trunk of an elephant is an incredible evolutionary adaption of the nose, and it is used to sniff, breathe, trumpet, drink, and grip. It has over forty thousand muscles (roughly sixty times more than the entire human body). African bush elephants have two opposable finger-like extensions at the tip of their trunk.

Around 8,000 African wild elephants roamed Virunga national park in the 1950s. Since the mid-1990s, poaching, illicit agriculture, and on-going armed conflict have resulted in a population reduction inside the Park’s limits.

In 2009, rebel troops began to disperse from the Park, allowing Virunga National Park, its rangers, and local residents to collaborate on development programs to improve elephant habitat. In 2020, 580 African wild elephants will have moved into the park, bringing the total herd to 700.

“The reintroduction of big elephant herds to Virunga is the result of decades of tremendous work on the part of Congo’s park rangers,” says Emmanuel De Merode, the park’s director.

Aside from being a spectacular sight, the herds provide advantages that extend beyond the scope of human intervention, swiftly rewinding the overgrown savanna, converting it to grassland, and attracting smaller grazing animals.

The reintroduction of elephants is a symbol of hope for Virunga in the aftermath of COVID-19, its negative impact on tourism, and the killing of twelve rangers in a rebel attack in April 2020. Long term, they are projected to drive species variety, attract tourists, and provide additional economic possibilities to locals.

Virunga National Park, originally Albert National Park, is a park in the Democratic Republic of the Congo’s north-eastern region in Kinshasa. It was established in 1925 and covers an area of approximately 3,050 square miles (7,900 square kilometers) with a diverse range of ecosystems to thrill while on Congo safaris Tours.

The park’s southernmost point is located on the northern shore of Lake Kivu, not far from the town of Goma to the east. The Virunga Mountains, which stretch into Rwanda and Uganda, are located between Lakes Kivu and Edward. The huge cloud-forested volcanoes of this range include the dormant Mikeno, Karisimbi, Visoke, and Sabinyo, as well as the active Nyiragongo and Nyamuragira. The Rutshuru Falls and the Mai ya Moto sulphur springs are located further north.

Lake Edward takes up a large portion of the park’s center section. The Ruwenzori Range rises to more than 16,000 feet to the northeast (4,880 metres). Savannas, peat bogs, marshes, lava plains, eastern steppe flora, and several types of woods, including tropical rainforest and bamboo, are all included in the park.

The park is home to a diverse range of animals, including elephants, whose numbers began to decline in the late twentieth century, and lions, which are also under threat. Virunga is also home to hippopotamuses, rare mountain gorillas, okapis, antelope, warthogs, and pelicans.

All hikes are conducted by Virunga Rangers and local pisteurs who are in charge of daily monitoring of the 10 habituated gorilla groups in Virunga. Treks often take 1-2.5 hours to complete each trip, depending on the location of the group being hiked and the severity of the terrain.

Visitors will be given surgical masks to wear when in the presence of the gorillas in order to protect their health. Because mountain gorillas are sensitive to human disease, we do ask that visitors cancel and/or rebook if they are feeling poorly at the time of the booked excursion. Visitors to mountain gorillas must be at least 15 years old.

Book with us a gorilla tour to Virunga national park or preferably a wildlife safari and get an opportunity to see a variety of mammals and primate species in the park.